I like the beginning of a new school year. I often mentally feel like it is more of a New Year’s celebration than the one in January. And after this crazy summer, I’m really looking forward to some settled routines and or course, starting my cooking job back up again!

Sometimes, when I get discouraged about how far we still have to go on our silly house, it is good for me to remember just how far we have come. And I am finding that very easy just now as we prepare to begin homeschooling again.

Last year, as I ordered curriculum and made lesson plans, I was trying to decide between schooling in a trailer or schooling in a construction zone. It was a tough pick, but I finally decided on the trailer, mostly because there was less dust and more air conditioning. (why do we start school in August?). I probably don’t need to elucidate on how difficult schooling was in a trailer with three students, a four year old and a toddler.  You all have imaginations, right?   But we did it because we had to. And if there is one thing I have learned over the last year, it’s that you can do a lot more than you ever imagined possible when necessity demands it.

We also did it so we could get to the point where I am now: trying decide which of the lovely and spacious rooms it would be best to do our schooling in.

But really, I don’t have to limit myself to one small space this year.  James is starting a new adventure with Veritas Classical Schools which will help give him (and me) a little more challenge, structure and accountability in his homeschooling.  I can’t believe he’s in middle school already!  So I am giving him the whole upper platform in his bedroom for a place to study.

Also, since he won the coin toss, he gets the awesome puzzle map on his wall. 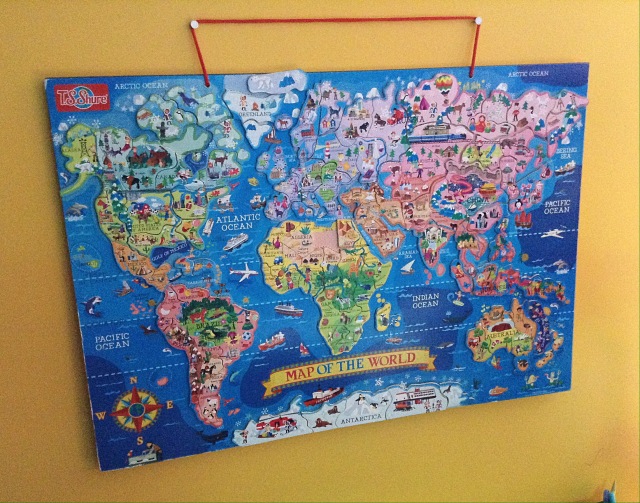 For my two middle boys (third and fourth grade) I am planning to teach a lot of subjects together.  So they get this nice, spacious corner in the upstairs landing.(thanks for the idea, Aunt Darcee!) I had a lot of fun putting this space together and am pretty excited for some of the curriculum we will be trying out is year. 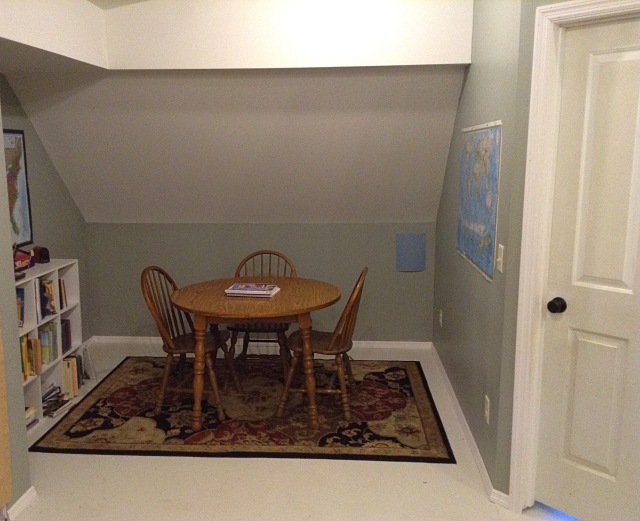 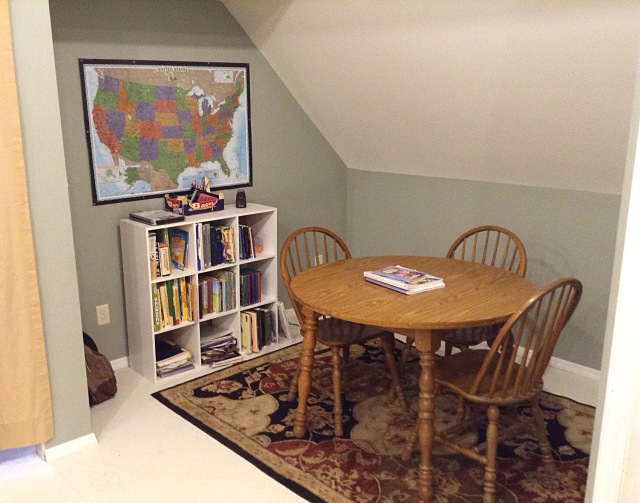 And then there’s my kindergarten boy.  Heaven only knows how I am going to teach him anything since he “already knows everything, mom” but we are going to do our best. I’m hoping having his own personal space will get him excited.

I’m also thinking this adorable monogrammed backpack made by his grandma  and the world’s cutest little boy Alphabet Cards might help. I mean, aren’t these the cutest?!

At any rate, I’m super excited for school to begin this year and so thankful for how far God has brought us. Time is a strange thing.  In some ways, this year has been excruciatingly slow and painful. And in other ways, it has gone by faster than any before it. It’s good to look back and remember but now I am looking forward in hope- hope that those last hurdles before us will be overcome soon and hope that I might just be able to teach another kid how to read!  Wish us luck.