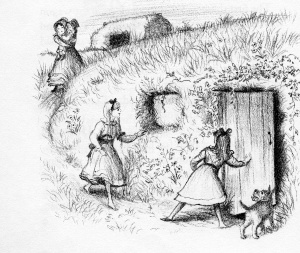 For most of my life, I have felt like I was born in the wrong century. I tend to romanticize this country as it was about 150 years ago- the pioneer spirit, the independence, the wild, open spaces to explore, and the hard working, ‘get it done’ attitude of those early settlers.

I blame Laura Ingalls Wilder for this romantic view of things.  I am mildly obsessed with her books, and she is known around our house as just ‘Laura’.  I can see my boys in a few years, rolling their eyes, and thinking to themselves, ”There goes mom, talking about Laura again.” But seriously, pick up any of her books and then try to say that these were not extraordinary people.

And when is the last time you read Farmer Boy, the book about Laura’s husband Almanzo? I always longed to live on a farm like that.  They quite literally made everything they had from scratch.  They raised sheep and Almanzo (at age eight, I might add) had to help wrestle them into the creek to wash and then sheer them.  Once the wool was stored, they collected nuts in the fall and stood over a huge cauldron of them, boiling some kind of dye, which would turn the wool grey.  Then, naturally, Mother would simply spin and weave the wool into the finest cloth. And then finally she would make the clothes.  Talk about cutting out the middle man.  No last minute trips to Walmart for second rate goods. Wouldn’t you want to live in such a self-sufficient way?  Anyone?  Am I crazy?  And don’t forget, they ate what seemed to be a Thanksgiving feast every day of the year.

I know a farm like theirs was a rarity.  They turned a good profit on their crops every year, unlike Laura’s Pa who hardly ever had a good harvest.  But the Ingalls family was happy with so little. living in a one roomed shanty on the prairie somewhere.  I know Pa Ingalls was an amazing man, but the older I get, the more amazed I am at Ma. She wasn’t always thrilled about moving west again, but she trusted her husband and made the best of things.   She made their little dirt-floored sod house elegant with little china figurines and crisp muslin curtains at the windows.

We live in a tiny house- huge by Laura Ingalls standards, in a not-so-nice neighborhood.  We have no wide open spaces out our front door- in fact, there are days when I just won’t go out my front door. We have a tiny little garden that produces some food, but thank goodness we don’t have to survive the winter on its yield.  We even have a couple of chickens (that belong to the neighbors) who wander through the yard and deposit the occasional egg.  And as I sit on my comfy couch, in my air conditioned living room, sewing dainty garments by hand I look around at my ‘little house in the projects’ and I tell myself I could hack it as a pioneer.

Sometimes as I sew, I listen to audio books. This week’s book is Little Town on the Prairie, and this passage brought me up short.

They were making Mary’s best winter dress. In the hot room, with the sun blazing on the thin board walls and roof, the lap fulls of wool cashmere almost smothered them.  Ma had measured Mary, and cut the patterns,and cut and basted the dress lining, Then when she tried the lining on Mary she had to make changes all along the seams.  Laura had never before known that Ma hated sewing. Her gentle face did not show it now, and her voice was never exasperated. But her patience was so tight around her mouth that Laura knew she hated sewing as much as Laura did.

When Ma had stitched the seams of Mary’s dresses, Laura sewed the whalebone stays onto the underarm seams. She took great pains to sew them evenly without making the tiniest wrinkle in the seams, so that it would fit smoothly on the outside. This was such anxious work that it made the back of her neck ache.

Now the basque of Mary’s best dress was ready to try on for the last time.
“Oh, Mary, it’s beautiful, Laura told her.”And the sleeves look absolutely skin tight to the elbows.”
“They are,” Mary said. “I don’t know if I can button—”
Laura went around in front. “Hold your breath, Mary,” she advised anxiously.
“It’s too tight,” Ma said in despair. Some of the buttons strained in the buttonholes, some could not be buttoned at all.
“Don’t breathe, Mary! Don’t breathe!” Laura said frantically, and quickly she unbuttoned the straining buttons. “Oh, how ever did I make such a mistake,” Ma said.
“Laura had a sudden thought. “It’s Mary’s corsets! It must be.” It was so. When Mary held her breath again and Laura pulled tight the corset strings, the bodice buttoned, and it fitted beautifully.
Umm, wearing whale bones and corsets in the blazing hot sun? And on the next page, Pa comes in to tell them that the blackbirds ate all the corn crop. So they make the best of it and have blackbird pie for dinner. Talk about when life gives you lemons… Perhaps I’ll just take the moral of the story and leave the circumstances to the pioneers.
Advertisement

One thought on “Little House in the Projects”