A big part of why I started this little venture of mine was to see if I could do what I wanted to do with the supplies I had on hand. I have always loved the challenge of making something without running to the store for a bunch of stuff. When we were small, for instance, my mother usually made us come up with our own halloween costumes from stuff around the house instead of going somewhere to purchase something ready made. This made for some highly interesting costumes.

We had some key accessories that we often fought over- a magenta princess cape, an old grey wig , my aunt’s yellow cheerleading pom poms, my dad’s old army uniform, and a mustard yellow Century 21 real estate agent’s suit. Don’t ask me where we got that last item- I have no idea. I was a real estate agent for Halloween a few years running, however. The grey wig was also used the year I decided to be an old lady secretary. And don’t laugh- the princess cape was unavailable.

The point is, having to come up with our own costumes made us think outside the box, or sometimes inside it. (One of my sisters wore a box one year that she painted to look like a barn. The rest of us were various farm animals.) It inspired creativity, and to this day, whenever I want to start a project, I hunt around the house first to see if there is anything I can use before I run to the store. I have a chest full of old clothes that I can’t stand giving away because I might want to use the fabric someday. That is a main reason I have such an interest in the work of Alabama Chanin. Most of her creativity came from using what she had, and that is why I got into upcycling cotton jersey.

I was watching a movie a few weeks back, called Coco Before Chanel – the life story of, you guessed it, Coco Chanel. I’m not sure what I thought about the film- overall it was pretty darn depressing, but the fashion parts were interesting. There is a scene where she is growing increasingly tired of all the gaudy dresses she sees around her. She is living with a guy at the time and she goes into his closet and pulls out one of his nice white dress shirts. Then she cuts off the white collar and cuffs and stitches them on to a simple black dress. He is furious with her. I started laughing to myself as I was watching it because I had just finished removing the sleeves off of one of the hubby’s old shirts for a project. I had his permission though. She then convinces a friend to wear the dress to a party and her reputation as a designer begins.

It’s still a popular design idea- the black dress with the white collar and cuffs. Just check out pinterest, or the rest of this blog post! 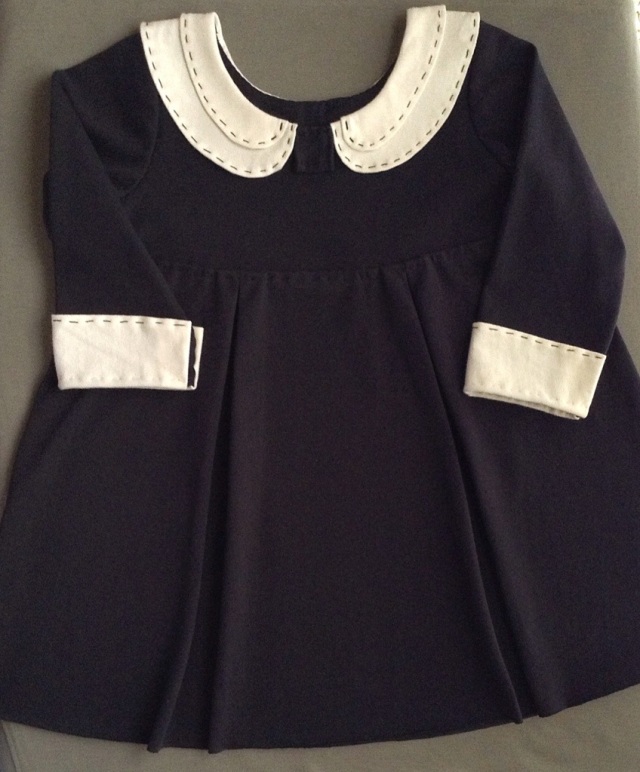 I doubled the collar on this one and added decorative black stitching for fun. 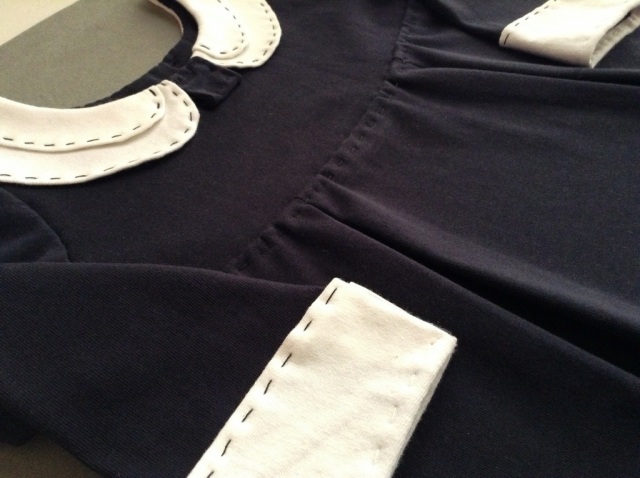 This is a view from the back. 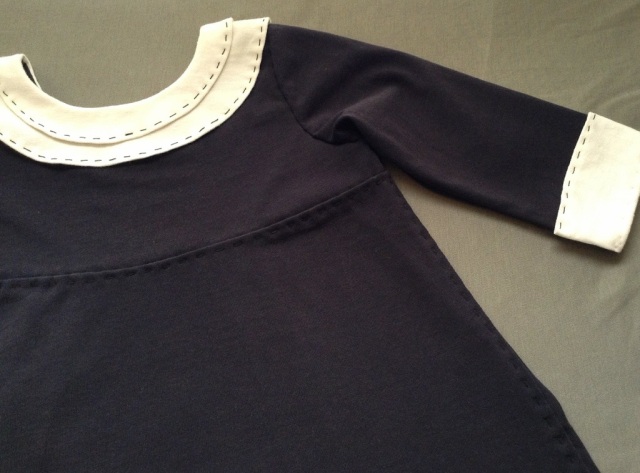 I would have used a model, but it came out a little smaller than anticipated, and I don’t think I know any eighteen month old babies right now. But if you have one, this should fit her beautifully!