I have found that the greatest challenge in doll making is walking the fine line between cute and cuddly or downright scary. I have been looking for a pattern I really like, and found one online last week. It seemed like a simple enough doll, but I ended up redoing every part of her at least twice.
The first problem was the cotton jersey. It’s really stretchy and can wreak havoc with a straight seam. If you don’t cut it right on the grain, the limbs and torso start twisting into grotesque positions. I had to resew one of the legs not just twice, but four times until it would point forward. And don’t get me started on the face shape! The cheeks were impossible. One minute she looked like a chipmunk preparing for winter, the next a miserable girl who just had her tonsils out. I pulled out the stuffing, took a few more stitches, and restuffed her.
And then there were the facial features. I sketched an idea, looked at some patterns, traced the proportions and started in. I worked on her face until way past bedtime. She wasn’t exactly how I wanted, but I was tired and figured she would do. I couldn’t find her the next morning, and went to ask the boys. They were playing with her in the bedroom, and I overheard one of them saying,

Naturally I was offended. I went in to retrieve her and asked them if they really thought she was scary looking. With great gusto they replied,

I almost gave up in disgust at that point, but then I figured I would at least give the poor girl some hair. I made her a wig out of yellow cotton jersey, and sewed it in place. I then asked the hubby if she didn’t look better with some hair on. He only said,

“Why did you part her hair in the middle?”

Now I was mad and determined. Off came the hair, off came the face, I did a side part and a bit more plastic surgery.

Next came the clothing. I thought purple would be nice, so I made a little purple dress with button trim. I put it on, and I just didn’t like it. I don’t know why, but I figured if I was going to all this trouble, I might as well dress her nicely. So I picked my favorite color- cherry red, and started in again. I liked this one better.

And then came the shoes. They were the only thing I didn’t do twice, and the only thing on this doll not made from upcycled cotton jersey. Maybe that’s a sign? They are made from wool felt left over from the short period my hubby built billiard tables as a side business. Did you know my hubby is a jack of all trades? I am so glad I saved it in my bottomless pit of a fabric chest all these years, because it is the very best quality felt you can find. So rest assured, this girl is well shod. 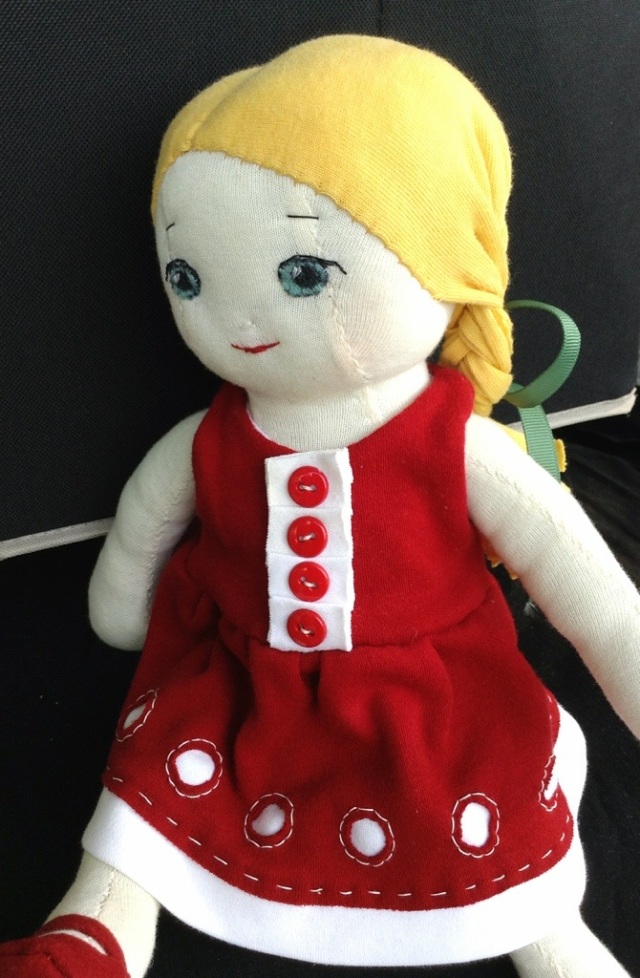 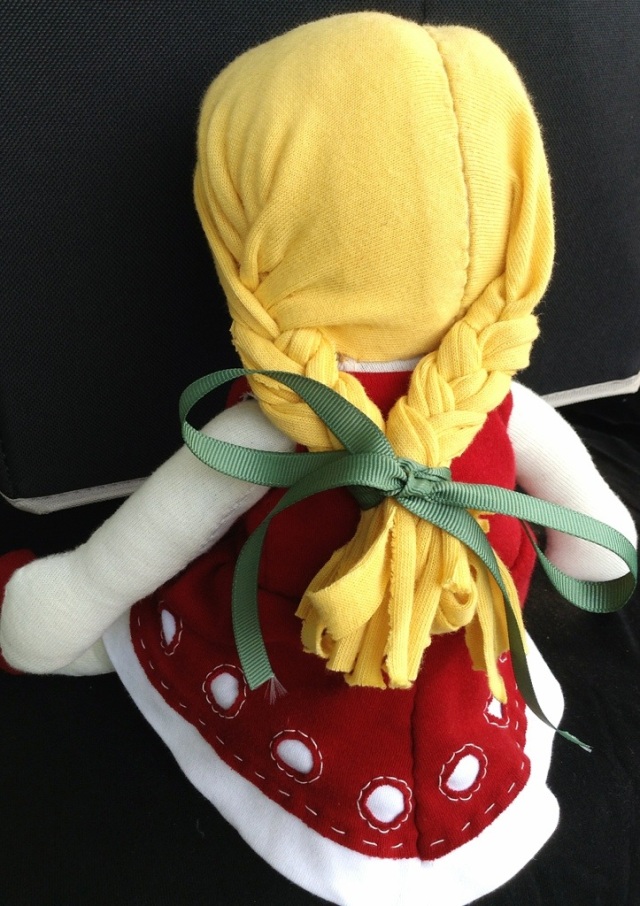 So there she is. I have looked at her so long that I can’t tell what I think about her anymore, but she is finished and up for adoption if anyone is interested…

5 thoughts on “The twice baked doll”