Well, the hubby’s birthday falls on a Sunday this year, tomorrow to be exact. I was trying to think of a fitting tribute for the man I love without getting all sentimental and mushy about how I am married to my best friend and how he is the best guy in the world etc. (which he is, of course) As I was pondering, one of the men who works for him at his current job site pulled up on his motorcycle and knocked on my back door. I had to tell him that the hubby wasn’t home, having taken the boys out for the evening. He introduced himself since we had never met and then said in one of those thick southern accents I still have a hard time interpreting sometimes,
“So you’re the one married to that guy, huh?”
“Umm, yes,” I said somewhat hesitatingly.
“He’s crazy, that guy”, he continued.
“Well, uh,…” I eloquently replied.
He went on-

“The first time I ever work for him, we were up in this tiny crawl space doin’ electrical. It was dark and hot and itchy and I just wanted to get the **** out of there.” (No apology for his language, by the way.) “I was working as fast as I could so, but I heard him askin’ me somethin’. He was tellin’ me to keep an eye out for crickets. ‘Crickets?’, I ask him. ‘Yeah, crickets,’ he tol’ me. He tol’ me he done caught a prayin’ mantis for his boys and he wanted to catch some crickets so he could feed the mantis and they could all watch how it catch it’s food. I thought he was crazy, ya know, but then I starts thinkin’ he must jus be crazy ’bout his boys to think of them like that when we was up in that ******* crawl space.”

Despite the earthiness of this narrative, by the end I was smiling and thanking him in my mind for giving me a very fitting tribute to my hubby, the man who hunts crickets to bring joy to his little boys. Then I came inside and decided to make him his favorite coffee cake for breakfast.

I am going to post this recipe in two stages, because I want to prep for it tonight, and bake it in the morning. I don’t know about you, but our house tends to get a little hectic on Sunday mornings as we try to get out the door to church, so whatever I can do Saturday night to prepare for the morning, I try to do. This isn’t the simplest cake in my arsenal, but it’s a special occasion! So here’s what we need to do tonight.

Get out your stuff-

We’re working with pretty basic ingredients here- flour, sugar, butter, sour cream, cream cheese. If you are wondering what’s in the pitcher, it’s whole wheat pastry flour I just ground in my vita-mix blender. I’m all about health here. Not really, but I have been playing around with different flours since I got the vita-mix for mother’s day, so I’m gonna try whole wheat this time. Usually I would just use all purpose flour for this recipe.

Step one, grease a 9 or 10 inch spring form pan and set it aside ’til morning.

Crumble it up with your fingers until it looks like this. Remember my apple crisp?

Now remove one cup of this and set it in the fridge ’til morning.

To the remainder in the bowl add
1/2 teaspoon each of baking soda, baking powder and salt.

Set it in the fridge ’til morning. Are you sensing a pattern here?

Step three, mix together your wet ingredients in a small bowl-
1 egg, 3/4 cup of sour cream and a splash of almond extract. 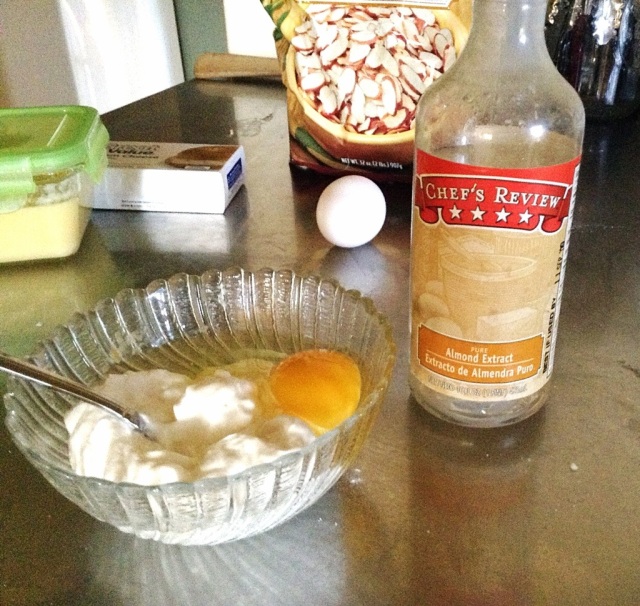 Confession. I have had this bottle of almond extract for eleven years. I use it very rarely, and a little goes a long way. But it still smells good so I keep using it. If you don’t have almond, vanilla works just fine. Set it in the fridge ’til morning.

Step four, the cream cheese layer. Here’s where it starts getting really good. Get a mixer out for this step. Trust me, it’s a lot easier. I had an aversion to using mixers for a long time, which I will explain in some future blog post perhaps, but for now go ahead and mix
8 oz. cream cheese, another egg and 1/4 cup of sugar until smooth. 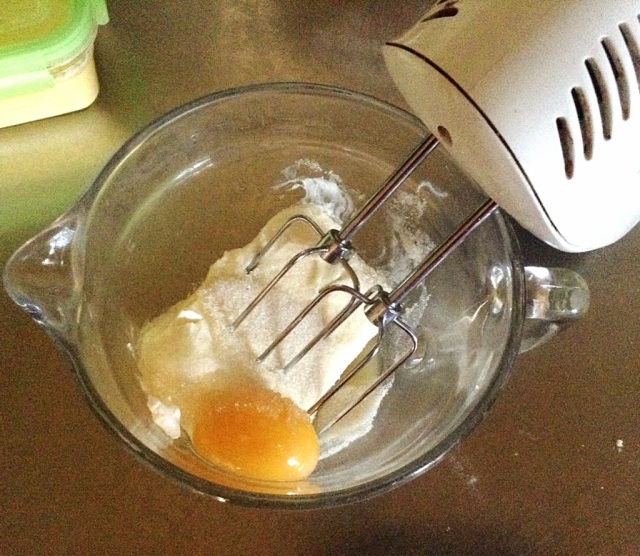 Aaaaaand set it in the fridge ’til morning.
So here is what you have ready to go in the a.m. so you can whip that cake into the oven and still have time to curl your hair for church.

The last two ingredients need no prep. I have some homemade lemon curd there in the tupperware. This is another one of those odd items that I almost always have on hand, because the hubby is not only French, he’s also half British. The original recipe calls for seedless raspberry jam, but I have used lots of different fruit spreads, and haven’t hit on a bad one yet. So lemon, raspberry, strawberry, blackberry- pick your poison. And you will need slivered almonds.
So now, stay tuned for the exciting conclusion of this fantastic birthday boy recipe!