I’m not really sure what would be considered the half way point on this monumental house project of ours. Was it way back when we restructured the whole thing, gave it a new frame and floor plan? Was it when we spent two months digging out a full basement just so we could jack the whole building up a few inches and put some proper feet under it? Was it before the first or after the second complete wiring of the house?

The hubby says, on average, that the half way point for most home construction is the sheetrock. Of course, I don’t think that average really counts for our house considering all of the special, extra and unexpected things that came with it, but it is true that a myriad of tiny things still need to be tackled now that the sheetrock has been installed.

Obviously, there is the painting- lots and lots of painting- priming and cutting in and spraying and rolling and the backbreaking labor that results in 4,000 (4,000!!!) square feet of colored walls and ceilings. But we are nearing the end of that.

There is all the extra wiring that now needs to be done- the outlets and light switches and smoke alarms, not to mention (we counted twice, thinking we must be mistaken) the seventy-two (SEVENTY-TWO!) light fixtures that need installation. To be perfectly frank, at this juncture, we are nowhere near being able to afford real light fixtures in numbers that large so if you ever come a visiting in the future, you will probably be greeted with the sight of a lot of naked light bulbs hanging from the ceiling. We’re taking baby steps here, folks.

But naked or not, we finally got them all installed and today, for the first time ever, instead of searching for a plug at the end of a bewildering tangle of extension cords crisscrossing the house, you can now flip a switch and get some light in return. And you can’t imagine the wonder of a plug in an outlet! Don’t get me started on the marvel of outlets! These are exciting things folks.

Even more exciting are the two bedrooms. For all intents and purposes, the house is still a construction zone. We are still functioning with one toilet and no other running water. There is no kitchen of any description unless you count the recess in the wall where my fridge will someday go. But last night, Oh Joy! we ditched the trailer for the night and slept in a couple of upstairs bedrooms we had been pushing to get ready.

My craft room and my girlie’s room were the first rooms we had painted and we got to thinking that maybe, if we could put a few finishing touches to them, we might just make them habitable. This meant dealing with the floors first, which were really in terrible condition.

They are original hardwood, but after much consideration, we decided they were too damaged to try and restore. So this meant me and my palm sander got down on our knees and tried to remove as much of the ancient rubbly mess, sheetrock mud and paint residue as possible. 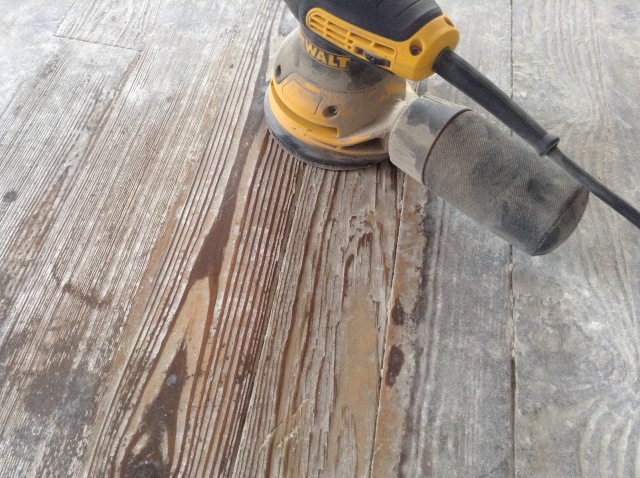 Then lots of shop-vacuuming and damp-mopping and finally, several coats of a good floor paint. 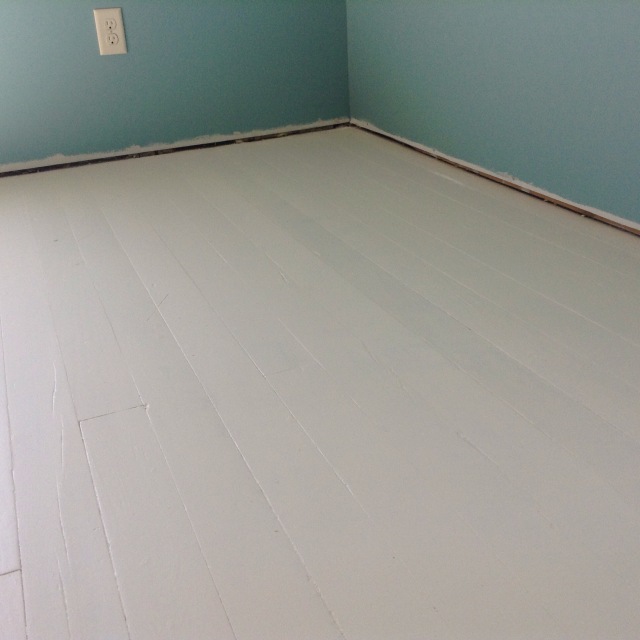 Then, there was a little trim to put up and we even managed a few doors.

Eventually, we want the entire upstairs carpeted, but since that isn’t really in the budget right now either, we found some nice carpet remnants and had the edges bound, just to make the floors a little comfier.  (And please disregard the plastic where the windows should be. Be patient. I imagine we might just get those durn windows finished sometime this century.) 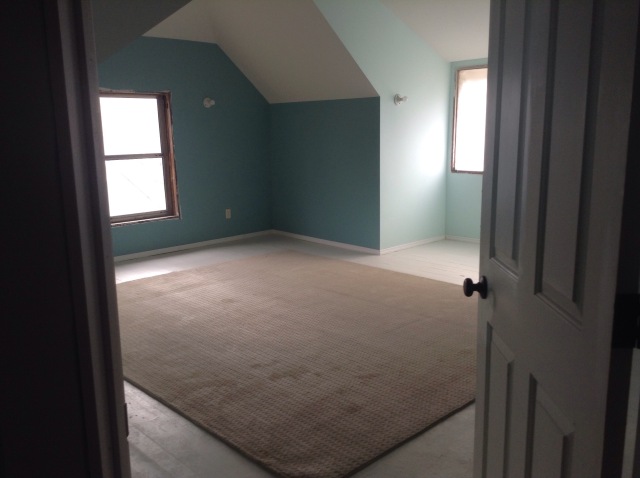 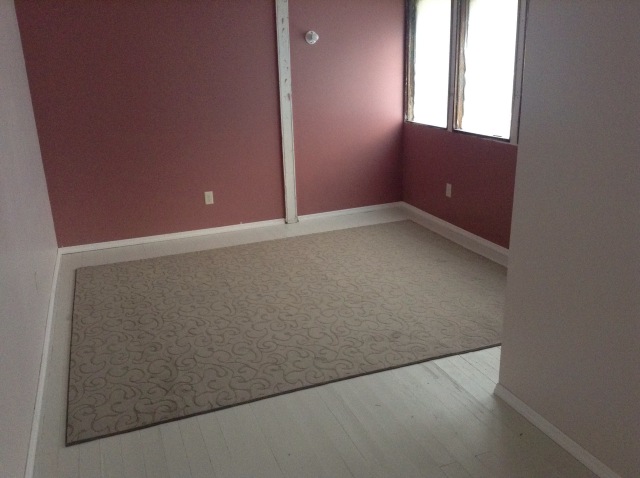 But windows aside, some generous folks donated a few used beds to our cause so that by the end of a very exhausting day, we were thankfully able to collapse onto something comfortable. 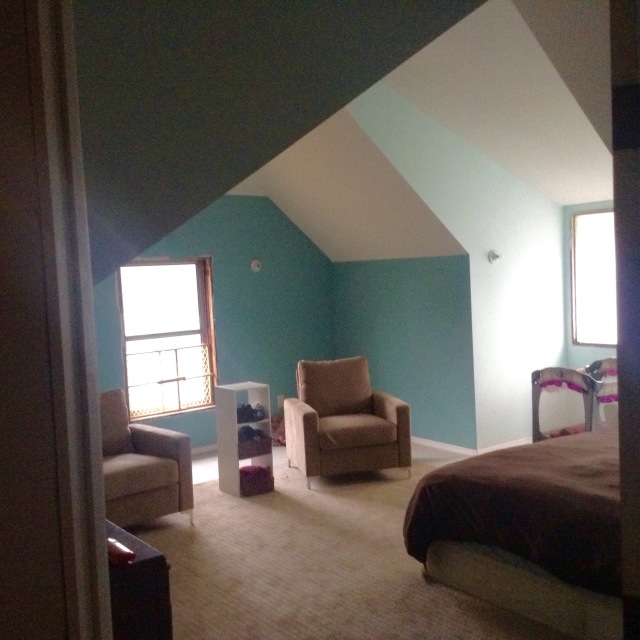 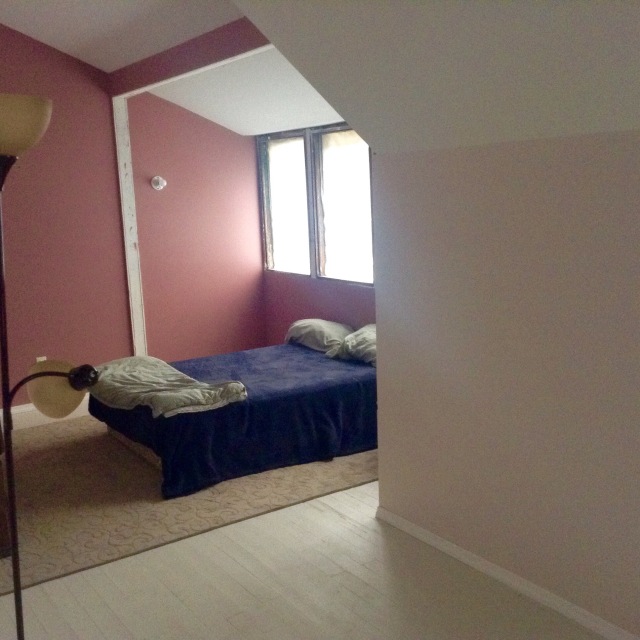 So now, although I nearly despaired many times along the way, I can finally say, nearly nine years (NINE!) to the day after we purchased this place, we are sleeping in it.

Of course, we aren’t technically living in it yet. We are still going to be in limbo for a while, trudging back and forth from trailer to house for our water supply and a place to cook our meals. We are now working hard on completing one of the four (FOUR!) bathrooms and the kitchen will be after that, although it might just be a hot plate and a sink for a while.

All that to say, I think we can safely say that we are past the half way point now, although I’m not sure we will ever be able to call this place truly finished. But isn’t that true of most things in life? What good would heaven be otherwise?