I am sure you all have been on pins and needles, waiting to see if I managed to solve the puzzle of the ‘too small house’, so here is an update of the boys room.  After much thinking, I decided to keep the boys room as the boys room.  They really do need the space, and I wasn’t sure how I was going to manage nap and bedtimes with the girly in there.  So she will be in with us.  But more on that later.

If you recall my last post on the subject, here are the before pics of the four corners of the boys room.

It was one of those projects that, once I began it, I wondered if it were worth it.  Things got pretty hectic in there for a while. 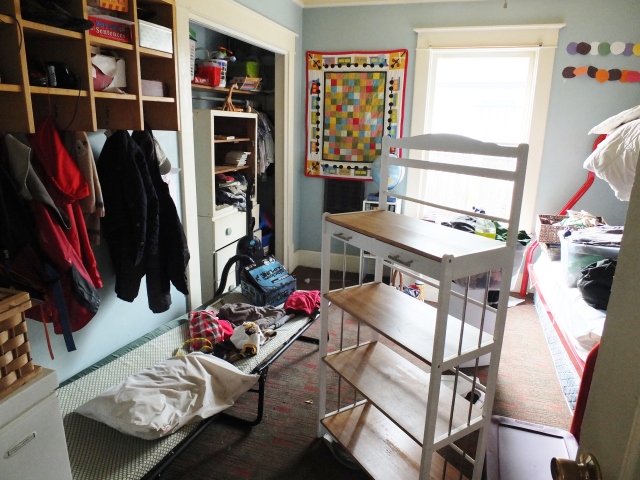 My first idea was to get as much excess furniture out as I could.  So the white shelving unit found a home in a corner of the kitchen, where I like it much better.

And then there were the dressers.  We have had those two stackable dressers/shelves since my oldest was born, and even though they are old and beat up, they are incredibly sturdy, so I wanted to keep them.  But I wanted to clear out the closet if possible, so out they came.

Remember the deep freezer I had in this corner?  I measured it and thought it might just fit in the closet, so I unstacked the dressers and put them where the freezer was.  I also put up some little curtains over  the shelves, since they really aren’t very pretty. 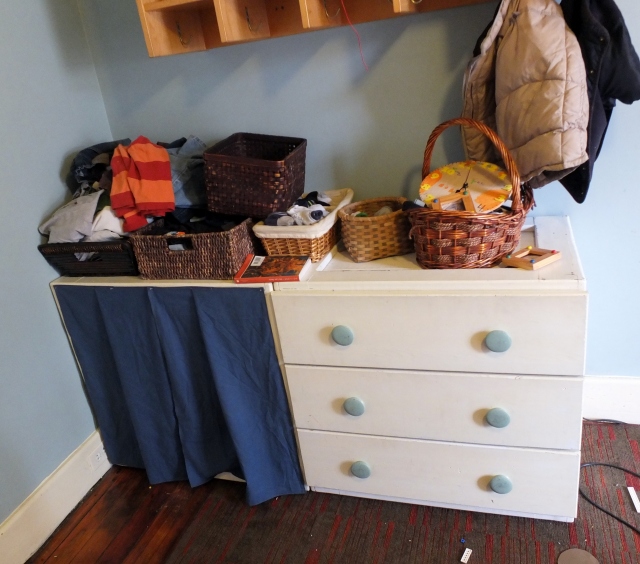 I had hoped the freezer would squeeze into the back of the closet, but I failed to calculate the baseboards into my measurements, so it didn’t fit as well as I had hoped.  I had to make a decision.  Which space did I value most- the boys room or my pantry? The pantry had a corner where I figured I could fit it just as well.  I decided it would make more sense in the pantry, so the boys helped me move it.  It does make my pantry a bit crowded, but it is so nice not to have a freezer in the boys room anymore!

The ugly cot went into storage, and a toy chest got repurposed to my room.  But I still wanted more space.

I wanted a place that I could dedicate solely to the storage of legos, which, as you can see, have slowly been taking over the house.  So I came up with a crazy idea that I wasn’t sure would work, but I wanted to try anyway.

Here is the final outcome, for now.

I tried to fit all shelves and dressers here, and just managed it.  There are shoes and toys in the dresser drawers instead of clothes.  I got each boy a box for their clothes, that hopefully will help them put their own clothes away and keep them somewhat organized, instead of stuffed pell mell into a drawer.

There really was no where else to move the piano, so this corner just got a good spruce up.  I put a lot of the music and books into storage, and hid other toys neatly in boxes on top. And what piano is complete without a pirate ship? 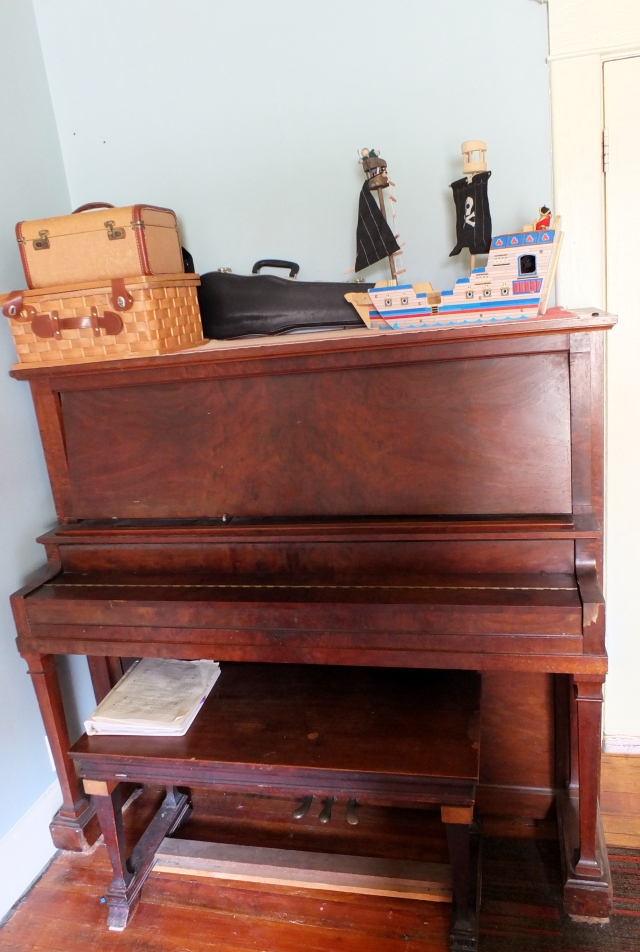 Here is where things started to get a little crazy.  I decided to get rid of the bottom bunk of the bed, keep the top bunk as a loft bed and use the space underneath as the “lego room.”

The boys love the new space, since with enough blankets tucked around the edges it easily turns into a fort.  And I am trying to implement the rule that all legos must stay within the confines of the bed/fort.  We shall see if that works. Ha!

“Umm, but where are the boys sleeping?,” you might be asking. Good question.  No, I am not making all four of them sleep on the top bunk.

Just follow me to corner # 4, and I will reveal my hair-brained scheme. 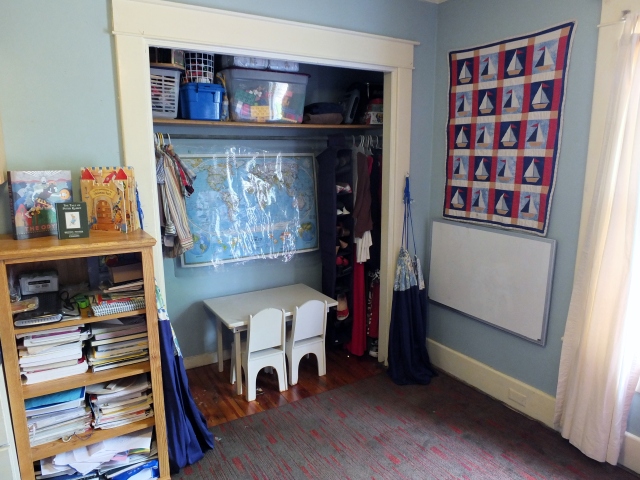 I’m sure the suspense is killing you. 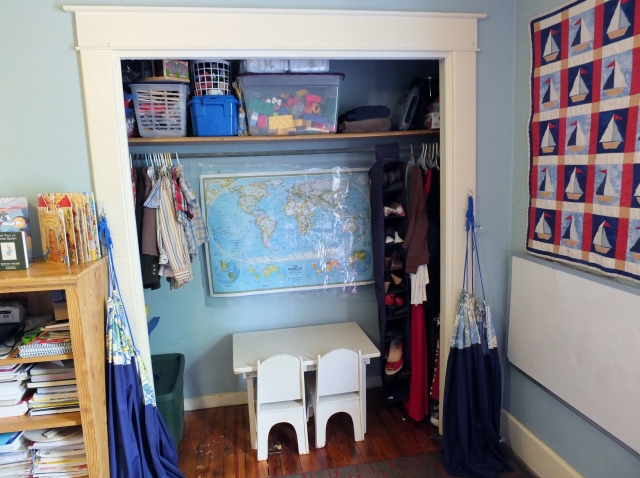 I found the hammock idea online, but didn’t want to spend a bunch of money on a project that I wasn’t sure would work.  So I went to the Goodwill and lo and behold, found a huge piece of sturdy blue canvas for ten bucks.  I cut it in half, added a loop of extra fabric from the armoire project to string some rope through, and had the hubby install some heavy duty rings into the wood frame of the closet.  The other side hooks underneath the top bunk for sleeping, and they store neatly away in the corners during the day.

The boys have gone nuts over them.  They have been sleeping in them for about a week now, taking turns on who gets to sleep on the top bunk and who gets a coveted hammock. So far it is working.

I was worried of course that letting the boys sleep in swings would get out of control very quickly, but it is actually working much better than having three or four of them piled together on the bottom bunk. They seem to sleep well and comfortably, and putting the hammocks away in the morning is much easier than making a bed.  So far so good!

So that is probably as much as I am going to do for the time being.  It freed up a considerable amount of space, got rid of a bunch of clutter, and gave the boys a few exciting new features to their room.  Now I just need to finish a few things for little girlie’s space.  So until next time!