A few years back, my mom called asking what my hubby wanted for Christmas.  He is kind of hard to buy for.  We like gardening and have slowly been collecting fruit trees, and I had just read an article about growing dwarf lemon trees indoors.  So I suggested she mail order a lemon tree for him.  It came a few weeks later and mom liked the idea so much that she bought one for my younger sister as well, hoping to enliven her little gloomy Washington apartment during a very bleak period of her life.

We live in a fairly warm climate, and even during winter our little lemon tree prospered indoors.  When spring came, we moved it outdoors and it grew new shoots.  It liked the humid summertime even more and was soon covered with fragrant blooms and small fruit.

I went to visit my family in Washington that summer and I noticed my sister’s lemon tree in a corner of her apartment.  Not a leaf was on it, just a skinny trunk like Charlie Brown’s Christmas tree.  I asked her why she didn’t throw it out, but she thought there was still some life in it yet.  I was helping her pack up because she would be moving south soon- to be near us and to try starting her life again in a new city.  She moved in the middle of one of the worst heat waves I can ever remember down here.  It was 108 degrees the afternoon she pulled up in her little car, only half full of all of her worldly belongings.  As I helped her unload, I noticed a pot with a skinny little bare tree trunk sticking out.  I just laughed.  The lemon tree had made it cross country, but it looked pretty dead to me.

She moved into our house until she could find somewhere else to live.  Poor dear, she slept on our living room floor on a yoga mat and shared a bathroom with six other people. She looked for jobs and apartments.  She bought a bigger pot for her tree and replanted it in fresh soil.  After a few weeks, a job came, and an apartment.  Remarkably, her little tree sprouted a few tiny leaves.  It was a good omen.  She was due to start work and move out in a few days when we got that dreadful call in the middle of the night, telling us that her estranged husband had died.  I left my hubby and three oldest boys behind for 10 days.  The baby and I flew back to Washington with her.  I thought she might want to stay in Washington, to give up on her new life with us, but she was determined to come back with me after the funeral.  Life went on.  She started her new job, moved in to her new apartment and restarted her life.  She made friends, became involved in her new church, and spent every Sunday dinner she could with us.  But she was always asking the question- now what? Should she follow this career, or go to the mission field?  Or an even more fundamental question- should she get out of bed this morning?   I went to her little house that winter for her birthday party.  Her lemon tree looked dead again.

Winter ended, and I began to see the old spring in her step.  She began looking forward with more optimism.  Unfortunately for us, that optimism led her to decide to move again- back across the country to help my other sister with the work at their little church.  I tried to be happy, and I was for her sake, but not for mine. I hated to lose the only family I had in town and the easy comradeship of a like -minded sister when I feel lost in a sea of boys.  I would miss her sweet and inspiring courage.

She was so busy preparing to move again, finishing up her job and tying up lose ends that she asked her boss if she could have a day off.  He thought he would have a little fun, so he told her she could take a day off if she asked someone out on a blind date.  She laughed at the suggestion, and when she mentioned it to me, I thought her boss was crazy and even a little bit insensitive.  But the more she thought about it, the more she figured she had nothing to lose except a little dignity.  After asking some friends if  they knew anyone who would be willing to go in on a dating “dare” she was given a phone number. She had already started moving her stuff into my house since her lease had run out and she needed my living room floor again.  Ten days ago, she walked into my kitchen  with the last of her belongings and said,

I hesitantly asked what the problem was, wondering what catastrophe was next for this poor girl.  Then to my great surprise she blushed all over and said,

“My date went well.  Reeeeeeally well. And we are going out again tonight- and probably tomorrow And I don’t know what will happen, but I am going with it.”

My astonishment still hasn’t ceased.  Such an unlooked for ending to this long year has had her and me giggling like school girls for a week.  She is still moving- left this morning in fact, and I have been crying off and on all day.  But the tears are very mixed- sadness at her departure- hope for her future- remembrance of the pure joy in her face these last few days.

Before she left, she presented me with her lemon tree.  It is still small,  but green and thriving again. 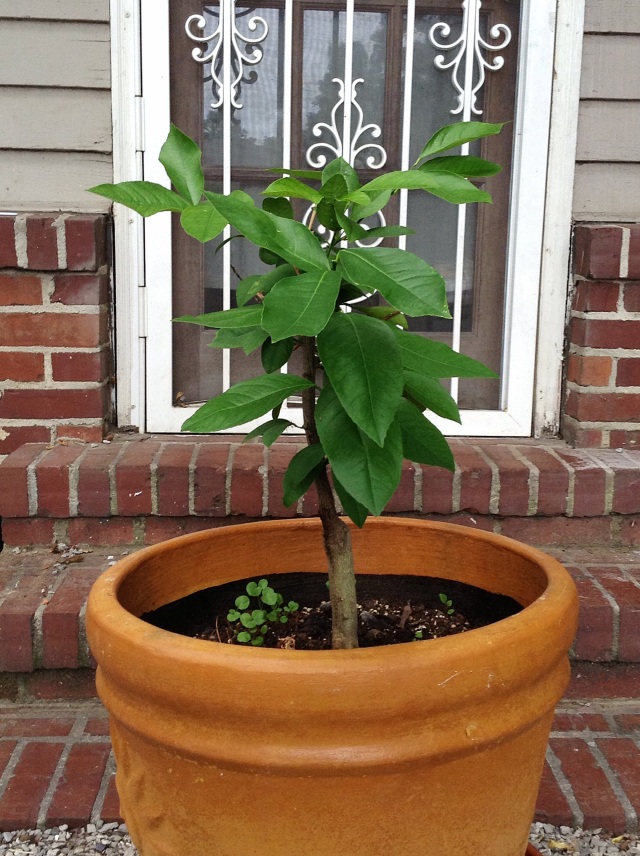