Let’s go back in history again today.  About 18 years ago I guess.  It was the day of the church picnic, and there was a pie contest going on.  I had gotten up in the pearly dawn, skipped down the street to the nearest of the wild blackberry bushes, and filled up my bucket.  After a quick rinse, I tossed the berries in sugar, cinnamon and a little flour. I had made the crust the night before, and soon my blackberry pie, beautifully latticed, egg washed and sprinkled with glistening sugar, was ready to compete.

My mom was entering her famous potato salad in the side dish category, and what with getting eight people ready and in the car, we were in a rush.  We had to make a few stops on the way, including a quick run to the the church to spruce things up.  (we did some janitorial work at the time.)  I set my pie carefully down on the seat of the van, careful to level it because the filling looked a little runny, and sped off to do my work.  I needed to make sure my pie was at the judges table in time.

We were soon finished, and as I headed back to the van, I noticed my little sister was already sitting in the back.  As I neared my seat, a terrible sight met my eyes.  My glorious, hopefully blue ribbon pie was, for lack of a better term, squished into oblivion. I looked at my little sister as the rest of my family came up to survey the damage, and asked her as calmly as I could what had happened.  She was carefully avoiding my eye, stuttering and muttering implausible scenarios, when I caught the words

There was no use crying about it, and we were late as it was, so we continued on our way.  I entered my poor, flattened pie in the contest anyway, and much to my surprise it still won! The judges said they were judging on taste, not looks when I tried to protest, but I have always had my suspicions that someone had told them  the story and they gave me the prize out of pity.  Either way, the story lives on in our family, and whenever anyone doesn’t want to admit to something, they pull out the now classic line-

I could say that that experience put me off making pies forever, but it wouldn’t be true.  I still make the occasional pie, but what I make a whole lot more often is Crisps. I looked up the difference between Crisps, Crumbles and Cobblers, and the recipe I would like to share here is a Crisp because it doesn’t have oats in the topping like a crumble, or biscuits dropped on top like a Cobbler.  Now you know.  I make Crisps rather than pies for the simple reason that they are easier and I can make them in a bigger pan.  We had a barbecue yesterday and I made a big one. Some people asked me for the recipe, so here it is.

This dish is all about versatility.  I use all different kinds of fruit in it- berries, peaches, a mix of both, or because apples were on sale this week, apples. 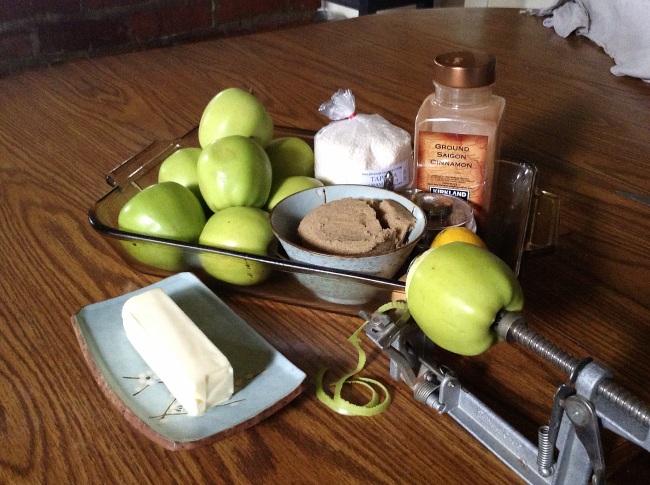 The hubby and I can’t agree on the best apple for a pie or crisp.  I prefer a nice sour granny smith, he likes a very sweet jonagold, so I used a mildly tart golden delicious this time, about ten of them.  This is for a big pan- an 11×14, but it will fit in a 9×13 as well.  I pulled out my old apple-peeler-corer-slicer for this since I had so many apples.  I don’t always use it since it tends to spray apple juice all over the kitchen, but it’s handy for big pies, and the kids love it!  So go ahead and peel your apples any way you like. 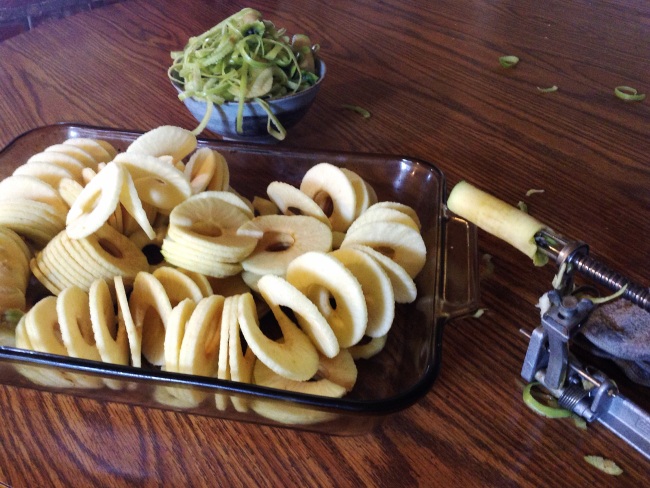 I have always struggled with pie and crisp fillings being too runny, so I have tweaked a few things, and the result is pretty fool proof for any fruit.  In a bowl, combine-

a grating of fresh nutmeg, a pinch of salt and a squeeze of lemon 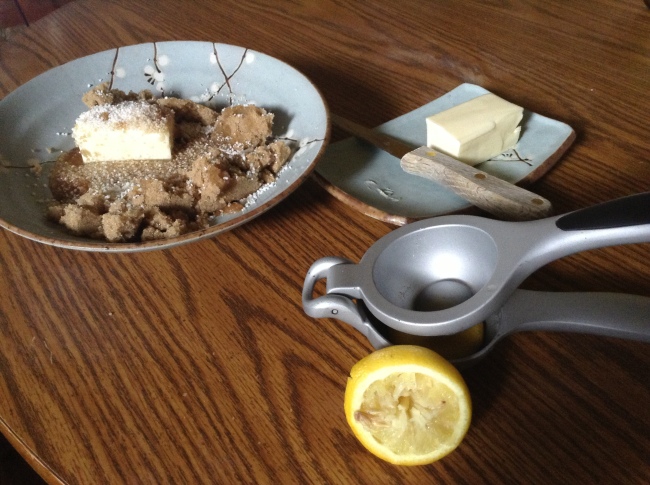 Pop this in the microwave until the butter is melted, then stir together until smooth.  The thing I have found that really holds the filling together, other than tapioca, is an egg, so go ahead and throw one in now and keep mixing. 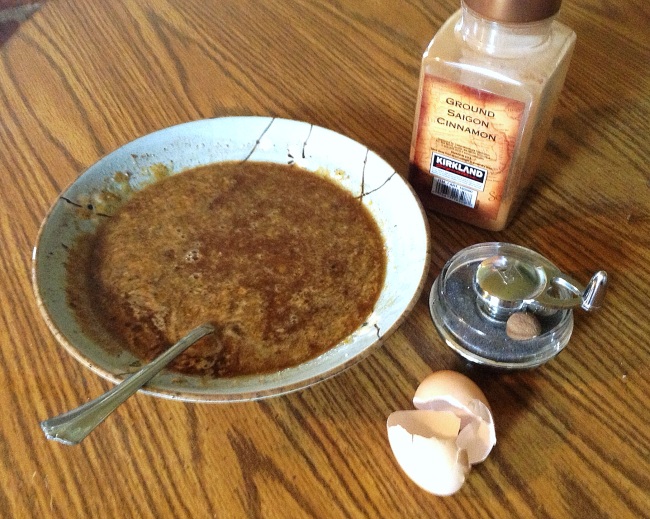 Now pour this over your fruit. 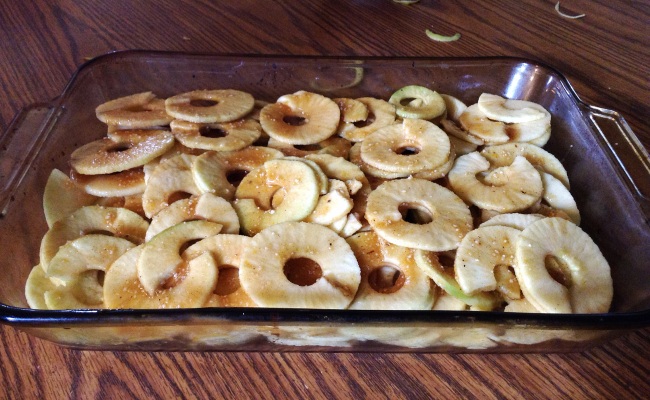 And now for the crumble.  Oh wait, pardon me, no oats here.

And now for the crisp.  The hubby always want more crisp, so I made a big batch.

In another bowl, combine 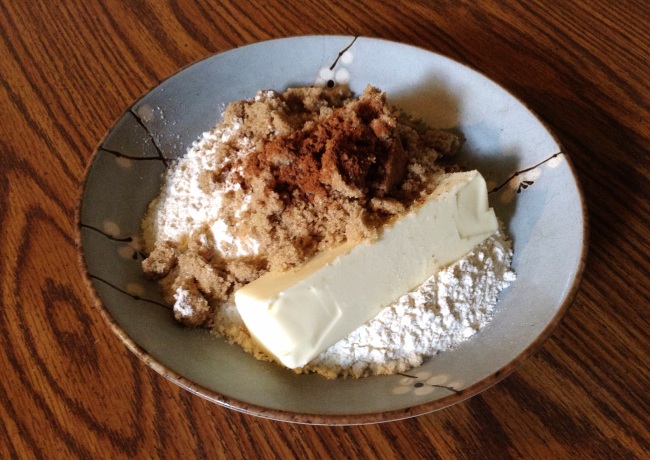 Crumble it (or should I say crisp it? ) with your fingers or a pastry cutter until it looks like this. 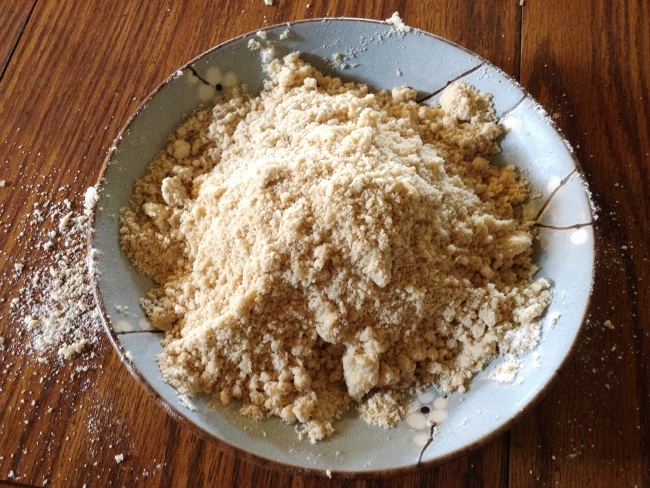 Then layer it on top. 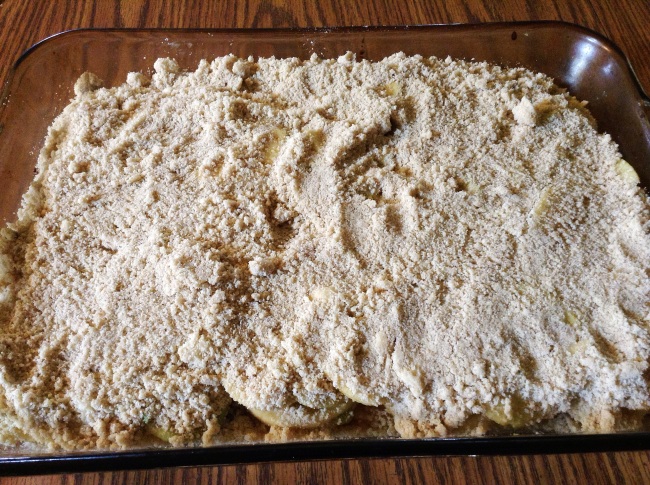 Bake it at 350 for about forty-five minutes.  I can always tell it’s done when the crisp is nicely browned and the fruit is bubbling underneath. It also should be smelling pretty stellar by now. 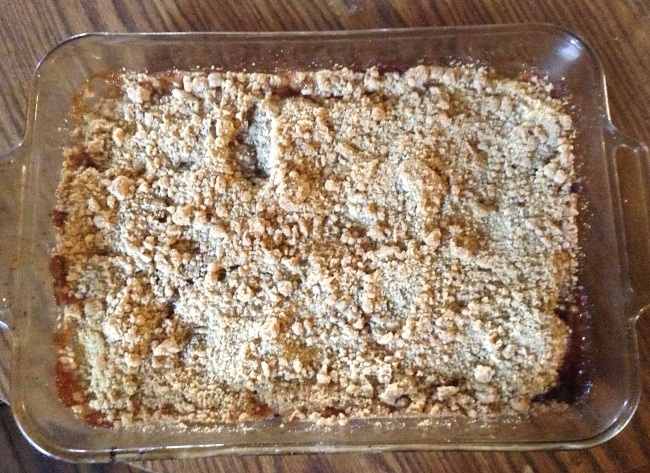 Here is what you want in a good crisp- a cookie-esque topping with a nice syrupy edge.  My boys, big and little, fight for the edge pieces around here. 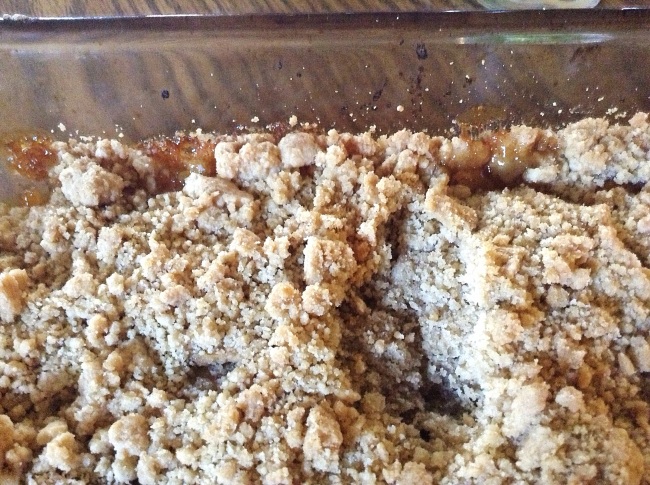 And there you have it.  I am new to posting recipes, so let me know if anything is unclear, or if you have any other questions.  Be sure to serve this with some form of sweetened cream if you can.