“Easy to make” is a relative term. Any skill is going to vary in its ease, depending on the person. Are they experienced at all in the skill? Have they practiced it? Are they determined to make it work? Do they have the necessary tools? Or perhaps, are they nine months pregnant and a little brain dead?
I tend to have a slightly different view of how easy a thing is to make when it comes to cooking. I don’t know how many times people have asked me how to make a recipe, and I have responded with “Oh, it’s so easy to make! You start by chopping an onion and some garlic…”
Then I get an eye roll, which says only too plainly- “You lost me at onion chopping. I want an easy recipe.”

So when I say these fries are really easy to make, I suppose they are not quite as easy as throwing a bag of frozen fries in the oven, but if you want a really delicious homemade fry, it doesn’t get easier than this.

When I am pregnant, I can easily dispense with the ice cream and the secret candy stash. I’m a sucker for the salty fried stuff. But it took me many years to get up the guts to deep fry at home. I always heard those horror stories of people getting burned in oil fires, and I myself once almost burned a house down while messing around with hot oil. And then there is the mess of it all and the expense of using all that oil, not to mention it doesn’t do much for the waistline. I’ve tried recipes where you soak the fries in cold water, dry them individually, toss them in corn starch and fry them once, sometimes twice in huge vats of hot oil. Tasty, but so much work.

All that to say, I didn’t do much frying until I came across this method on one of my favorite shows, America’s Test Kitchen. I sometimes wish I hadn’t discovered it, because I make fries probably more than I should now. But the America’s Test Kitchen method was discouraging because they required the potatoes to be squared off first, and then cut very small and exact. I think they even suggest using a ruler to get the precise 1/4 inch measurement. If you know me at all, I don’t use rulers in my kitchen. Even measuring cups are optional. So I decided to use the method on steak fries instead- just big hearty wedges of potato. And it worked beautifully. So here goes. This is what you need. 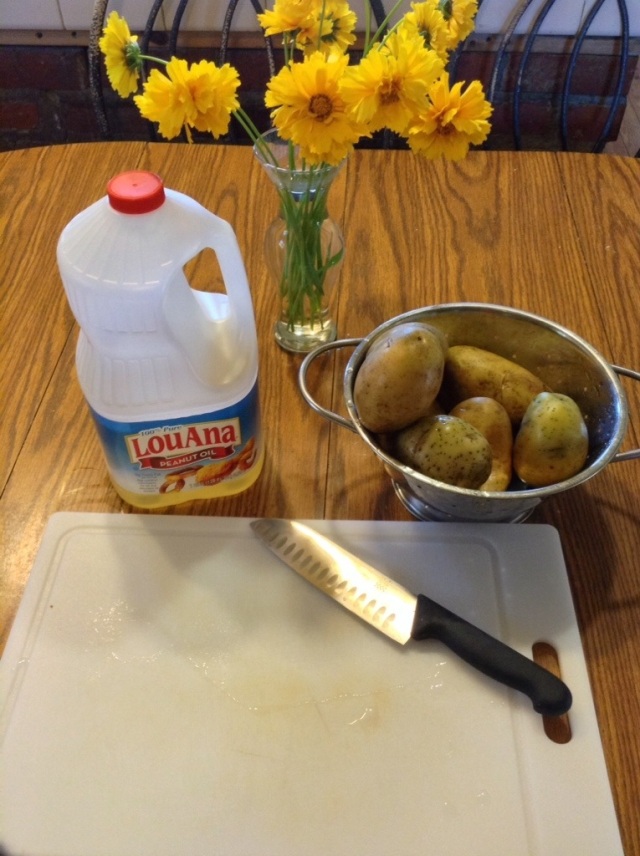 Start with your potatoes. Yukon gold work best because they are tastiest and you don’t need to peel them, but russets would work too. Give them a quick rinse and cut off any imperfections. 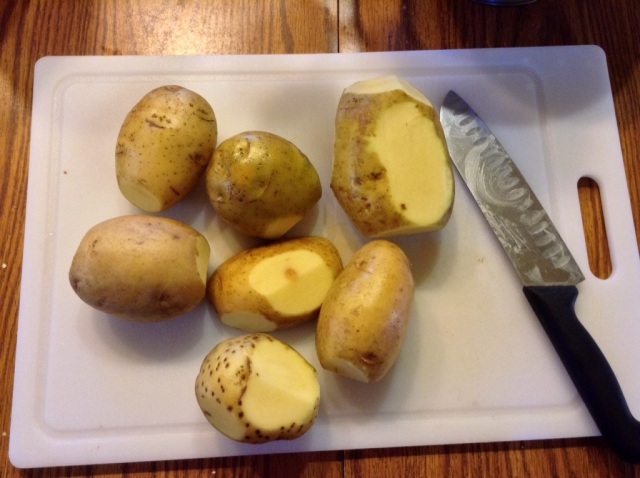 Then just slice them in half. 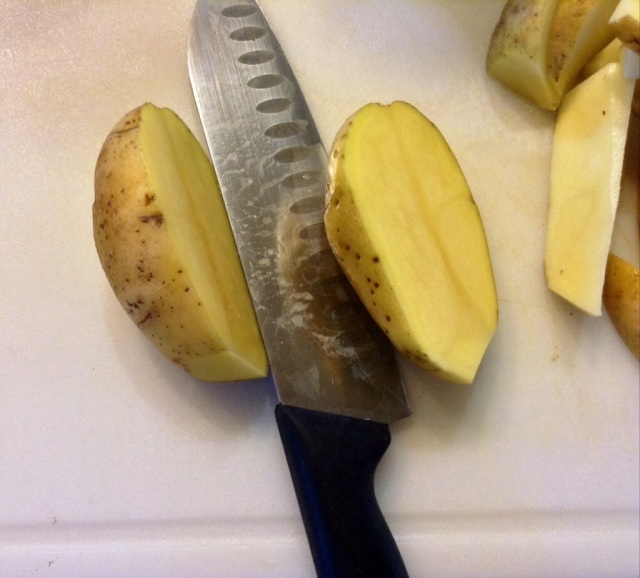 Then slice the halves into four or five wedges each. 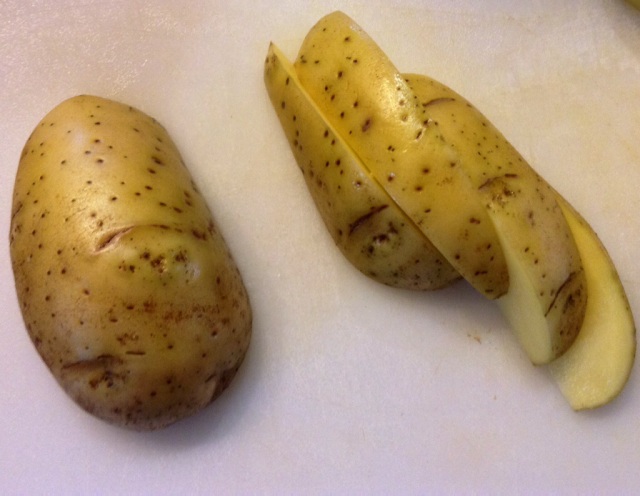 Fill up a deep, heavy bottomed pan with as many fries as you want to make. I used my dutch oven here, and got the boys to help. 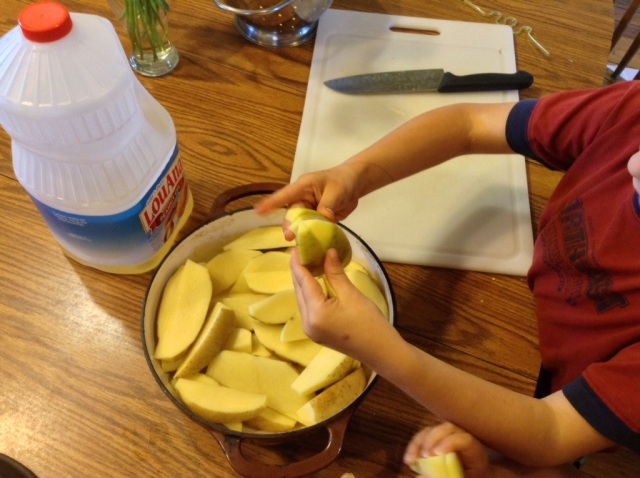 Set your pan on the stove. 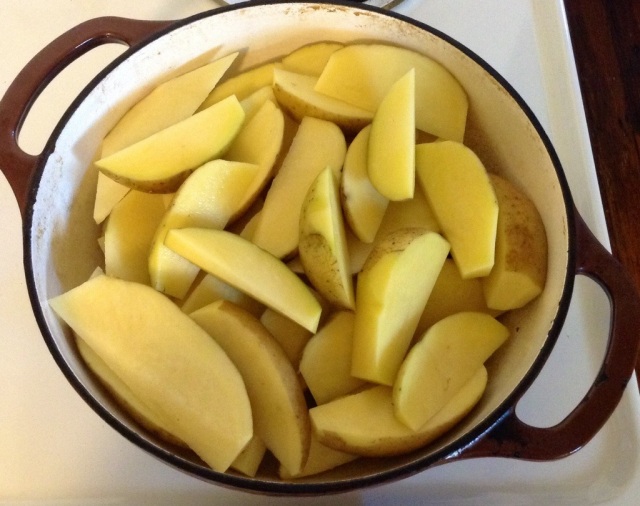 Then add your oil. I love this recipe most, because instead of four quarts of oil, it only takes about four cups. It also doesn’t require any thermometers. Just pour the oil in (I use peanut oil) until it almost covers the potatoes. It’s okay if they aren’t completely submerged. 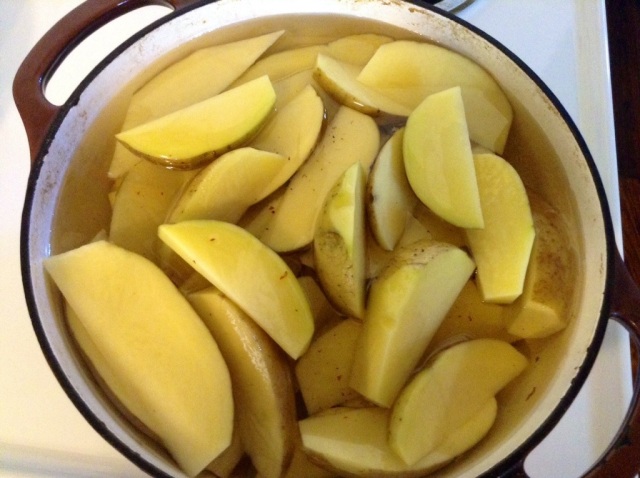 Then turn the stove on high. That’s about it! 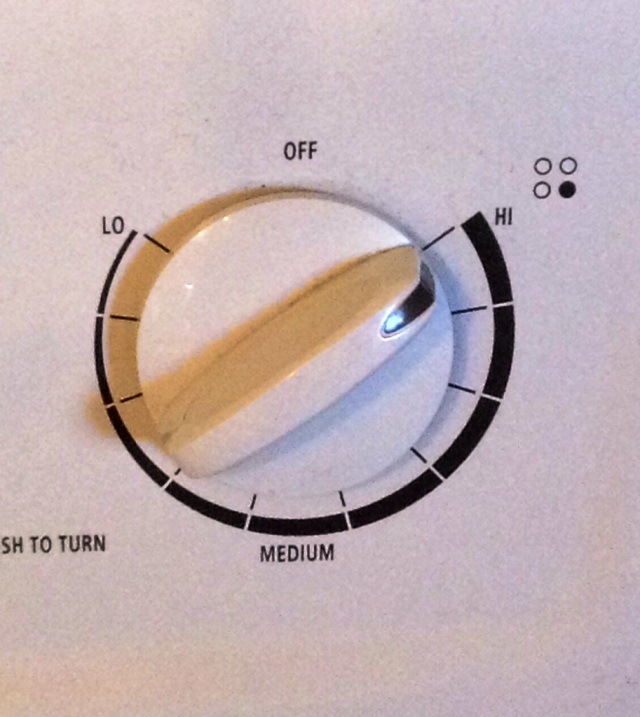 These are going to take about 25 minutes to cook, but it’s hands off, so you can work on the rest of your meal.
After about 5 minutes, you will start to see little bubbles floating up. 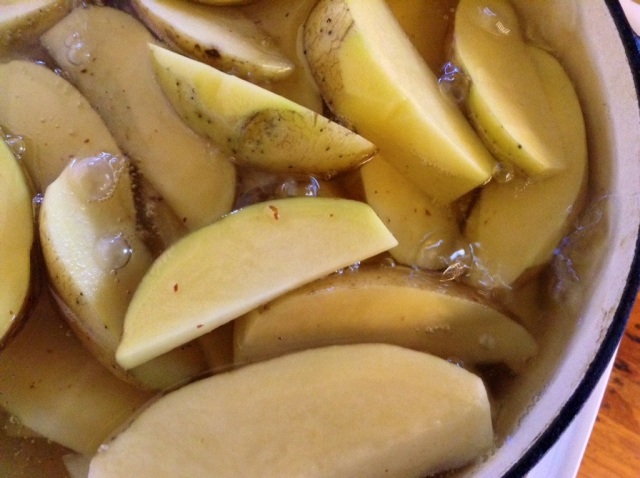 After about ten, the oil will have come to a full, rolling boil. The oil may splatter a tiny bit, but it won’t overflow.
Just let it go, and don’t stir it. The potatoes are very soft right now and will just get mashed up. 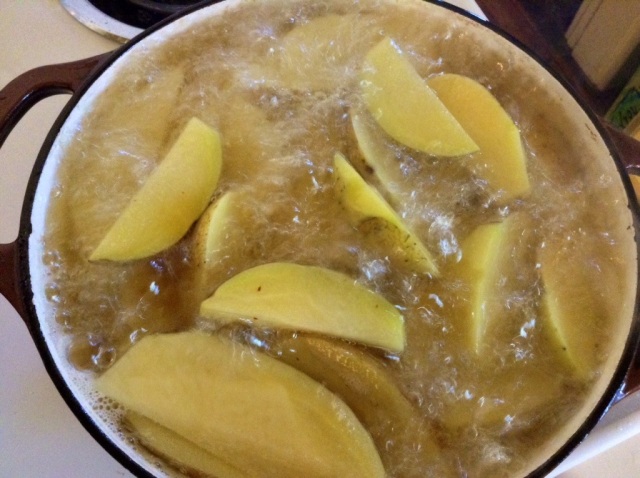 After ten more minutes, you will see the edges start to brown a bit. 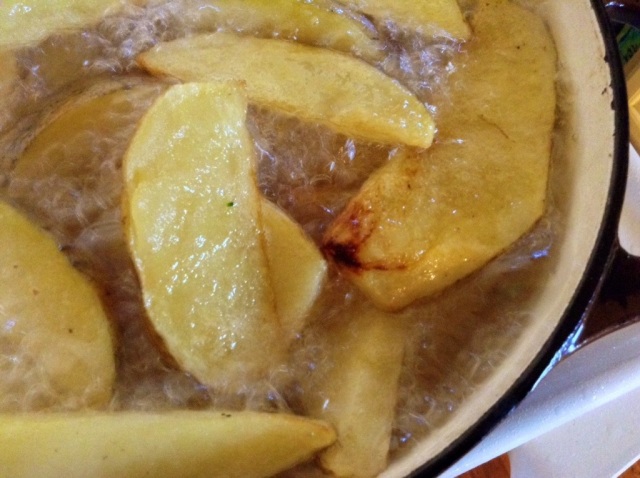 Once they start getting really golden and have a nice crust, you can gently stir them with some tongs, or a slotted spoon, just so the bottom ones don’t burn.

Then we are about done. Once they are a deep golden color, just remove them to a plate lined with plenty of paper towels. I usually do two layers, salting generously as I go. 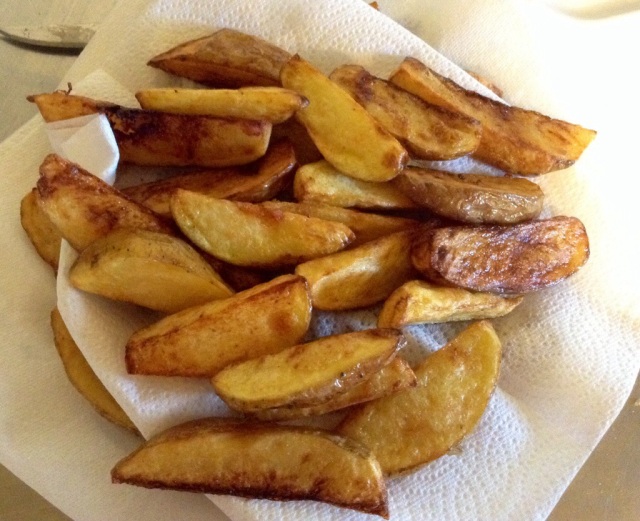 Serve them with whatever you want, like a big pack of pre-made Costco chicken wings and a big bag of precut Costco broccoli that the hubby brought home. Because who am I kidding- I am nine months pregnant and a little brain dead. I’m not deep frying and grilling at the same time. 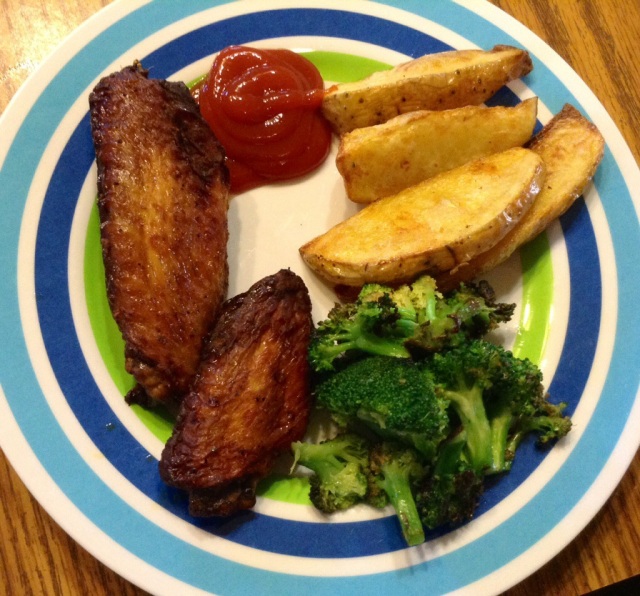 Oh, and quick clean up tip. I wait for the oil to cool down, then put a glass jar with a strainer in my sink (in case a little oil spills) 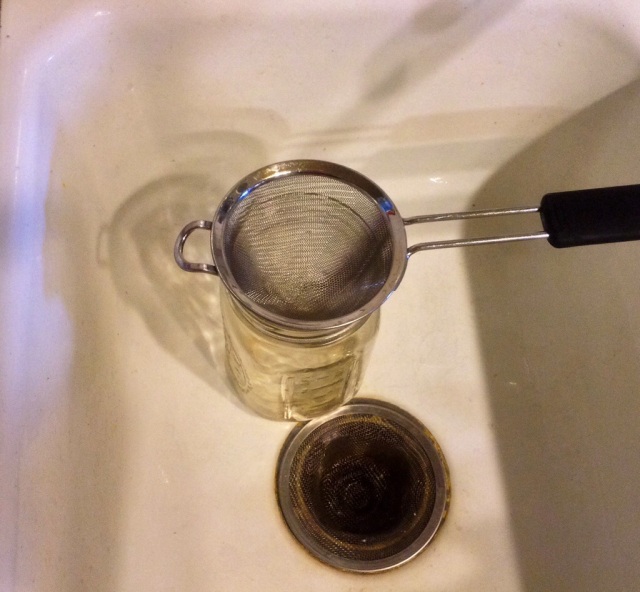 Then I strain the left over oil into a jar and save it for the next time. I usually use the oil for three batches before I discard it. 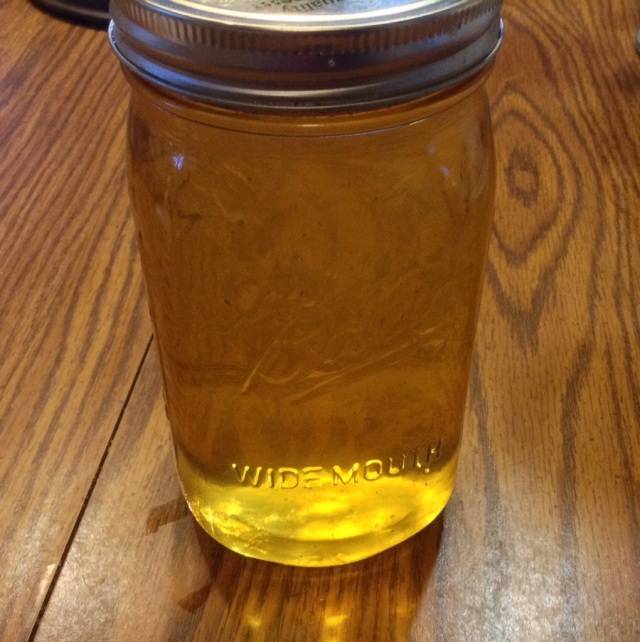 So that’s that! A fantastic, crispy homemade french fry that is “so easy to make!”

One thought on “Fries for a Friday night”